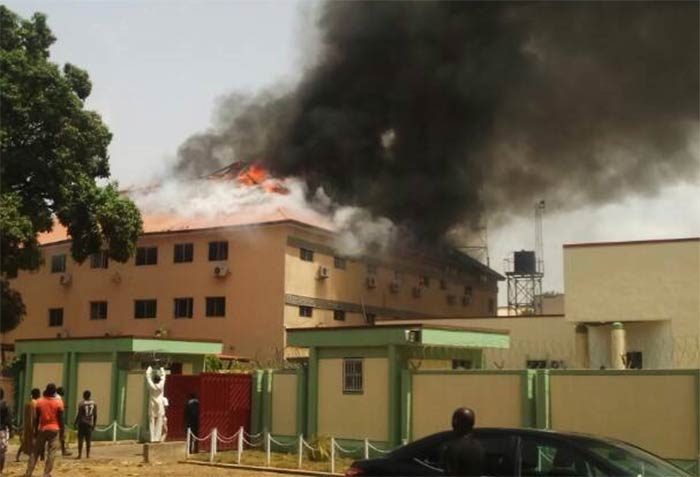 At least five persons on Thursday were hospitalized following a fire outbreak at the Lagos campus of the Nigerian Law School, located at Ozumba Mbadiwe Street, Victoria Island.

According to eyewitnesses, the incident led to commotion among occupants who ran in different directions for dear lives.

An eyewitness, simply identified as Segun, explained that the fire, which started at 10pm, was caused by an electrical fault, from the first floor of the five-story building hostel, accommodating about 1500 law graduates on the Lagos campus.

“The fire came with a big bang. There was a stampede in the hostel. I saw a student jump out from the first floor where the fire started near the reading room. Other students ran out of their rooms in panic.

“At least, five people were seriously injured while one elderly woman who is a cleaner had her toe dislocated.

However, the fire was put out by hostel security officials who switched off the main power supply immediately before the arrival of state fire service some minutes later.

The unidentified injured students are currently receiving medical attention at the clinic.

The Director of Lagos State Fire Service and Rescue, Margret Adeseye, through, Public Affairs Officer, Amodu Shuabu, confirming the incident said it was a minor one and no casualty recorded.

According to Adeseye, preliminary investigation by the fire service indicated power surge as the cause of the fire outbreak.

She added that a detailed investigation would be carried out to determine the immediate and remote cause of the incident with a view to preventing future occurrences.

My team is weakened – Antonio Conte slams Tottenham
Next Article